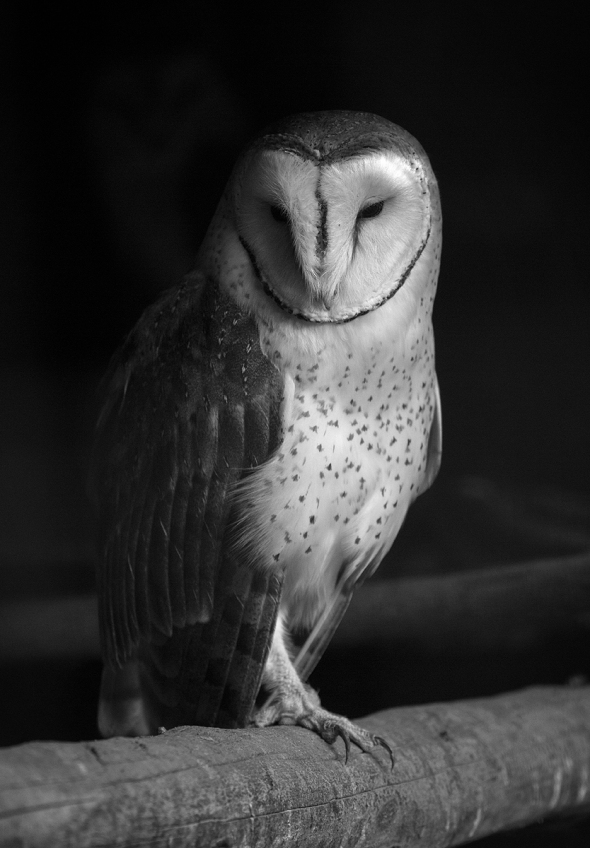 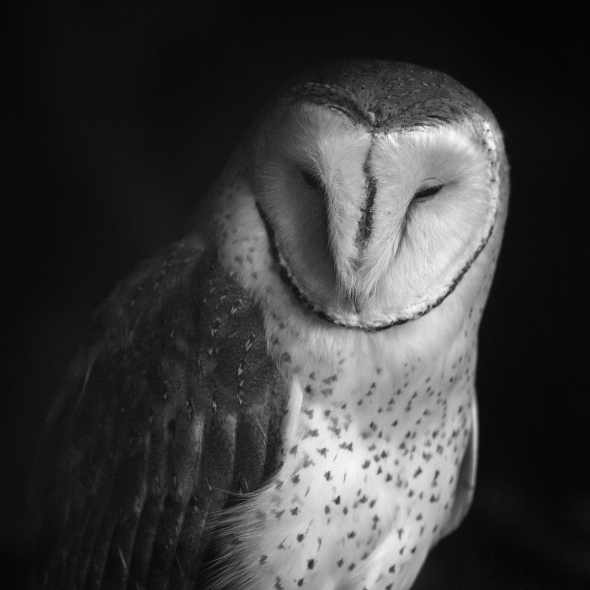 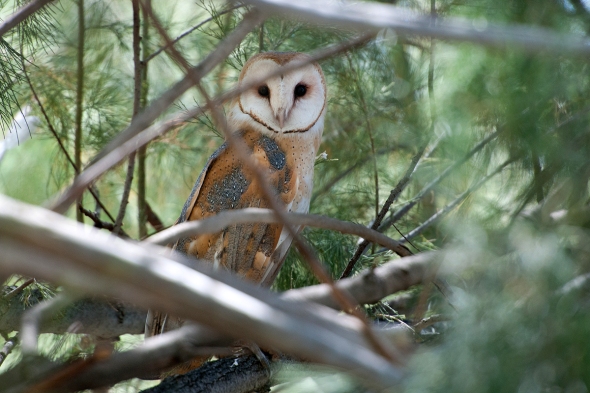 Mercey is known for its Long-eared Owls but in the summer the population thins out. The resident Barn Owls were in abundance though. I found 5 of them in the near 100 degree heat keeping their cool in this stand of trees. 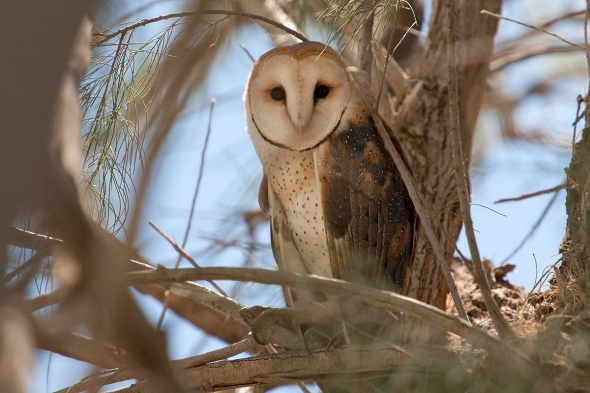 Not many visitors this time of year… but they are thinking of raising the “birdwatching fee” to $25 from the present $5, because some folks have been staying over 5 hours staking out the owls. Most people there for the birds only linger an hour or so and I’m guessing the fee increase will keep a lot of them away. 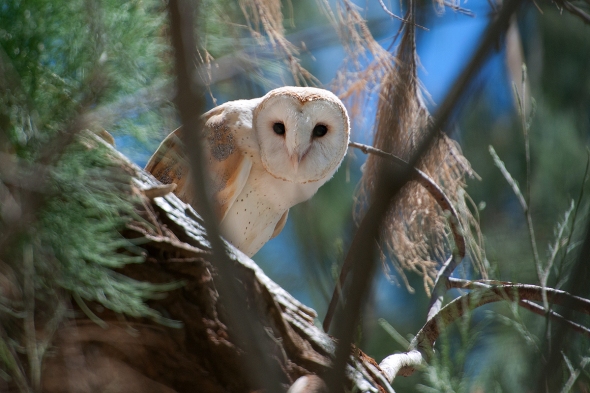 I didn’t see this owl until it froze me in place with that spine tingling scream. 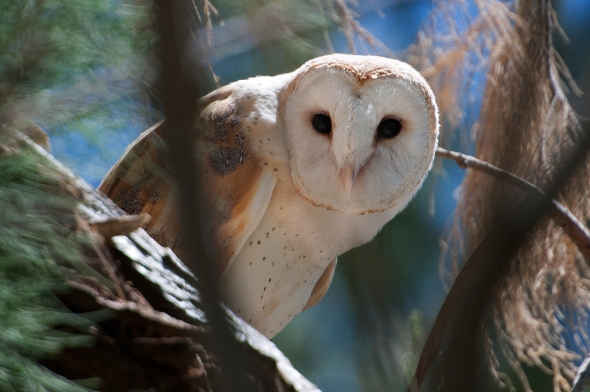 I took a quick picture and backed off. They are gorgeous birds and I was feeling a little guilty for disturbing them at all. 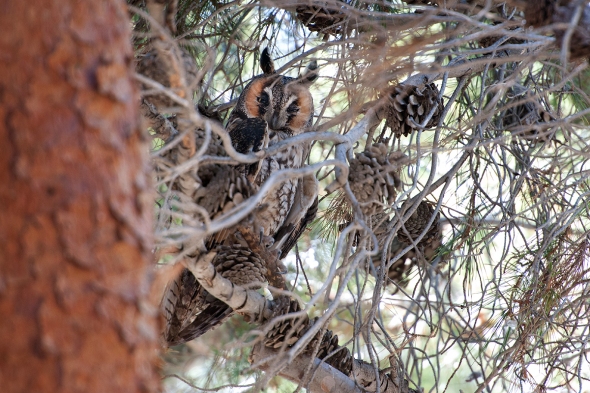 The famous long-ears weren’t showing in their usual numbers but this lone individual was not hard to find, obscured as it was, in the tree they always use. 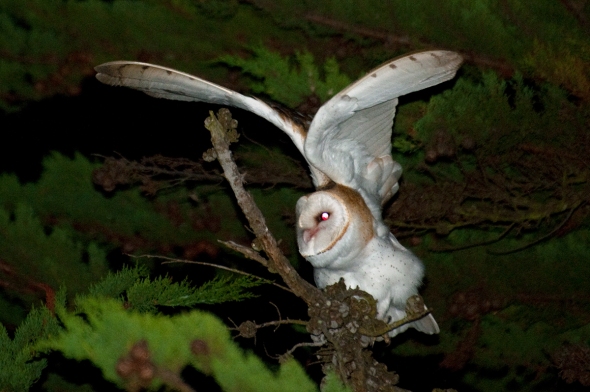 Ghosts at the Palace 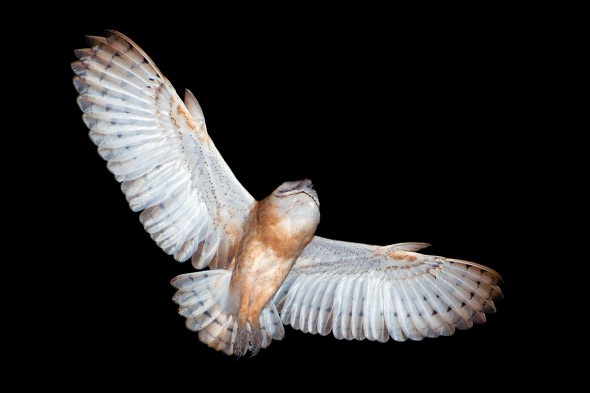 The ghostly aeronauts are in full swing at the Palace of Fine Arts. Looks like the one nest we found in April (click here) has turned into three. I spent an hour and a half with the begging, clicking, chirping Barn Owls now residing in the rotunda. 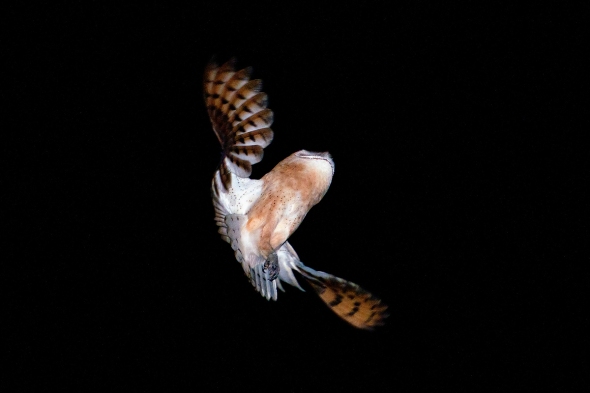 Landing atop the columns. The owls are a bit more outgoing and less secretive than they were a few months ago. 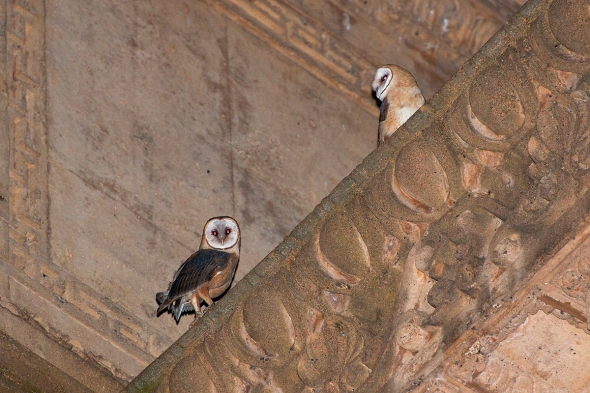 I saw this couple, and a number of birds who were fully feathered but acting like juveniles and begging. 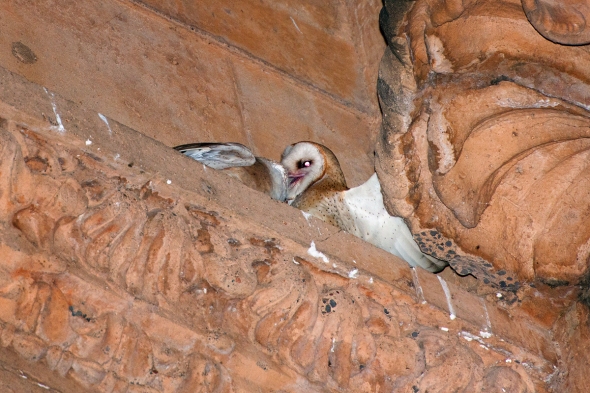 These owls are touching bills. I’m not sure why, but it seemed like the one on the left was begging and the other was just putting up with it. 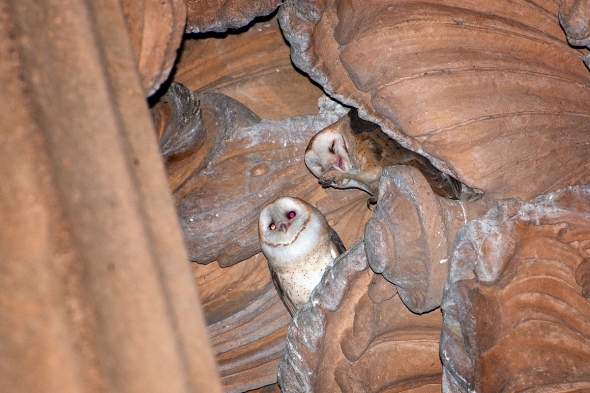 This couple seemed more settled, but after a while it was hard to keep track of which owl was which. They travel silently and often wander along the ledges. I saw 9 different owls in 90 minutes. 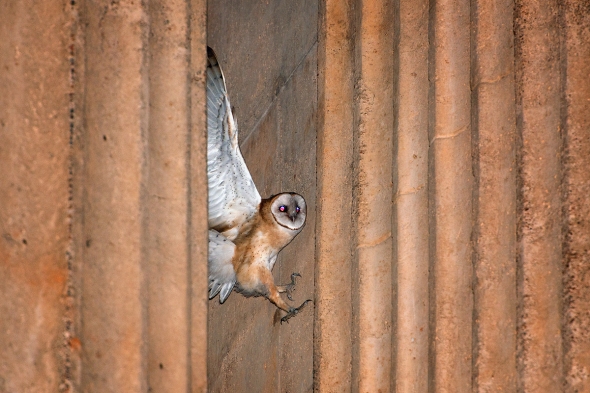 This owl actually landed on a vertical face, clinging to the wall for 20 seconds before flying off.

This is a female who has several 4-5 week old chicks. Two of them have fallen from the nest and are now being cared for by WildCare. I happened to be involved in one of the rescues.(see the video below) 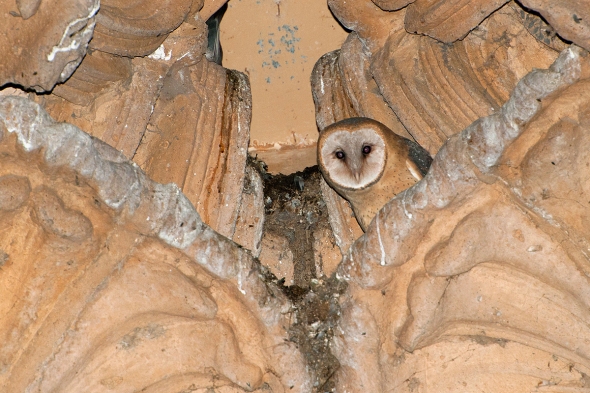 From what I can tell, this is a fully feathered chick, peering down from the nest. 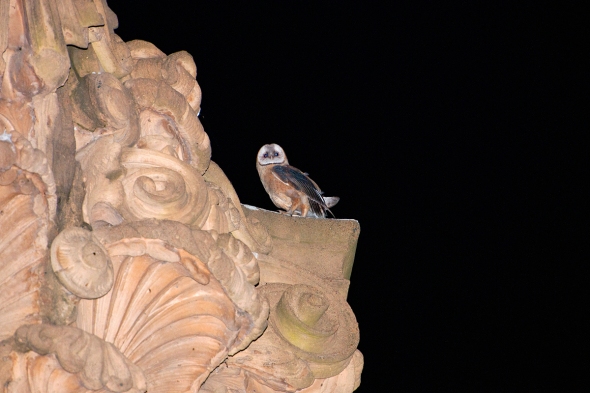 They are venturing further out each day. They seem truly nocturnal, not becoming active until darkness really sets in. 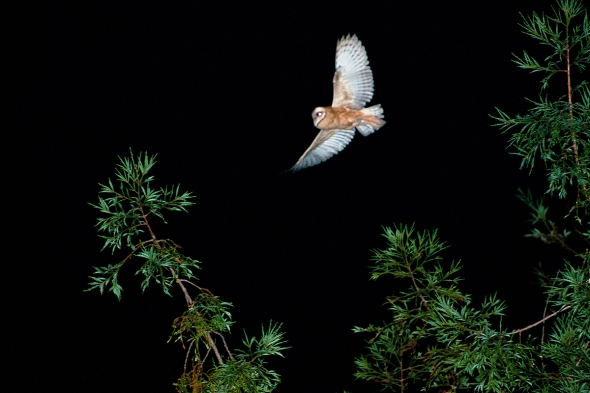 Below is video of a 4-5 week old chick that fell 40 feet from the nest. It seemed in good health and will either be re-nested or slow released with other young owls at a rehab center. 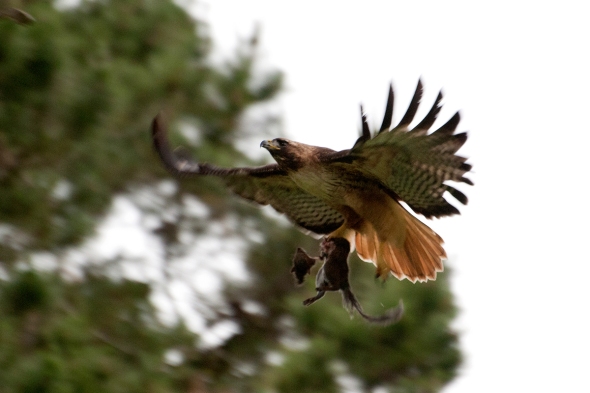 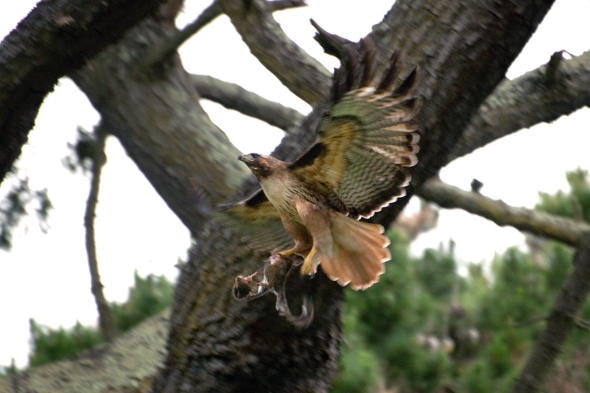 A friend and I went to Stow Lake to see if we could get a glimpse of the normally cooperative owls on Strawberry Hill. The fledglings have grown old enough to disperse and the parents were making themselves scarce so we struck out on Golden Gate Park owls. But much of bird watching is about what you see when you are waiting around for other things to happen, and last night was no exception. We had been tracking a female Redtail who was sitting near what we think is an active nest. The male arrived with a recently caught squirrel and she set off in pursuit to relieve him of his meal. He managed to escape long enough to perch and spend about 10 minutes dining on a nicely exposed branch. Once the female made up her mind, she stopped making her persistent yet quiet begging calls, and launched off her perch, diving toward the male with great intent. He fell over backwards trying to escape his larger and stronger partner and she took over what was left of the squirrel. Above, she relocates with her prize. The squirrel may be hard to recognize because it has been, err… rearranged.

END_OF_DOCUMENT_TOKEN_TO_BE_REPLACED 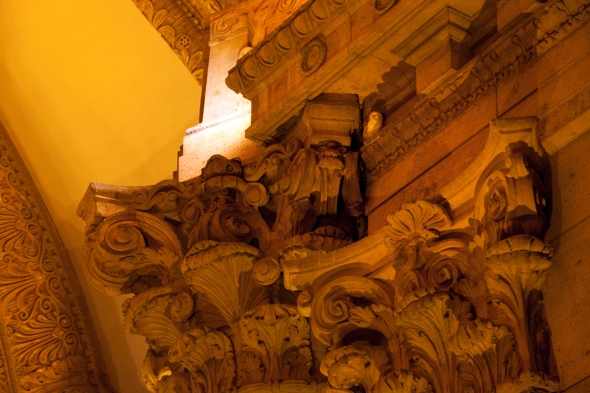 After months of seeing evidence of owls at the Palace of Fine Arts, on April 12th Siobhan Ruck and I found the first recorded breeding Barn Owls in San Francisco in nearly a century.

END_OF_DOCUMENT_TOKEN_TO_BE_REPLACED

All images, illustrations, video, and audio in Bird Light Wind are protected under United States and International Copyright law. Images may not be reproduced, copied, transmitted or manipulated without written permission.
%d bloggers like this: