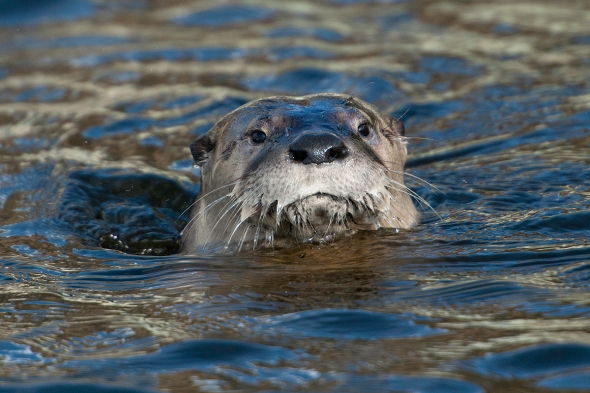 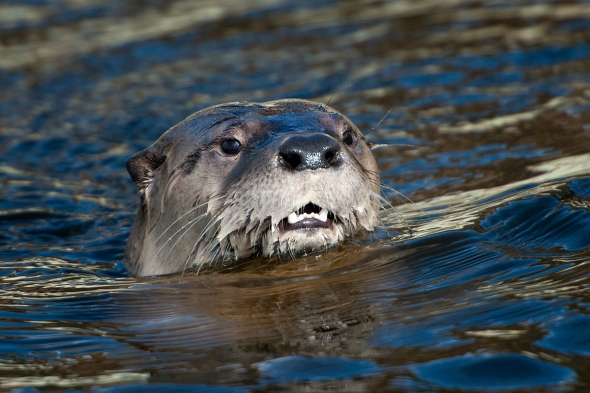 Those of us in the Bay Area who pay attention to such things are aware that a River Otter dubbed “Sutro Sam” has taken up residence at the Sutro Baths. River Otters are fantastic creatures. They are cute, but they can take down Pelicans and pull gulls under the surface… I love that about them, their adorable yet ferocious character.

Sam spends his days in and around the pool, sometimes preening on the grass, sometimes hiding in the rocks. He has gotten pretty familiar with the throngs of visitors and often approaches dogs who are led down into the baths. I heard a tale of one guy who brought his dog down there to play with Sam because he thought the otter was lonely. 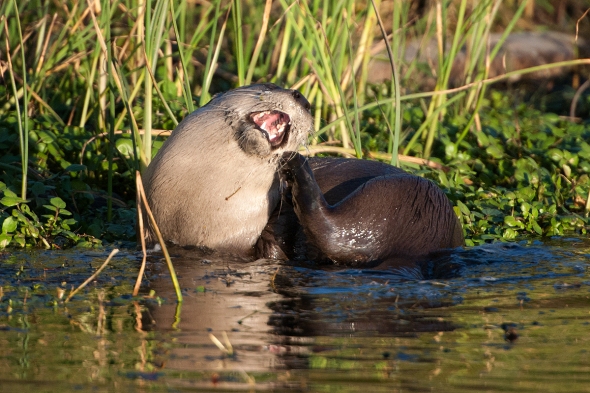 Here is a glimpse at those sharp little teeth. Sam eats a lot of fish, but crayfish, amphibians, and birds are also on the menu. Problem is, catching birds is tough, and Sam is a young male who hasn’t quite figured out how to go after the larger prey yet. 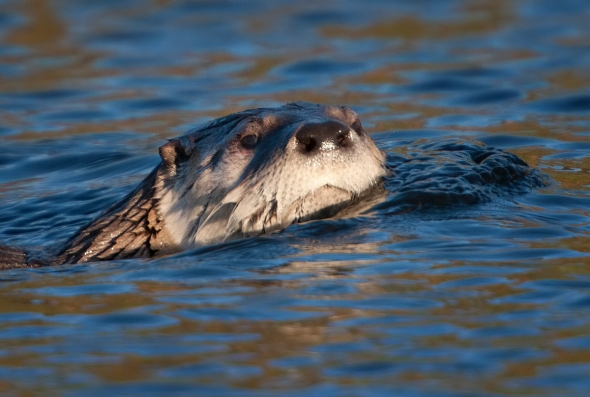 Here he is venturing out to try his luck. At Rodeo Lagoon in the Marin Headlands, there is a group of 4 otters (down from 7) that have better luck hunting birds. It is thought that one of the 3 that have disappeared was the most experienced hunter. It wasn’t uncommon to find the carcasses of Pelicans along the shores of the lagoon. I have posted about their predatory predilections HERE. 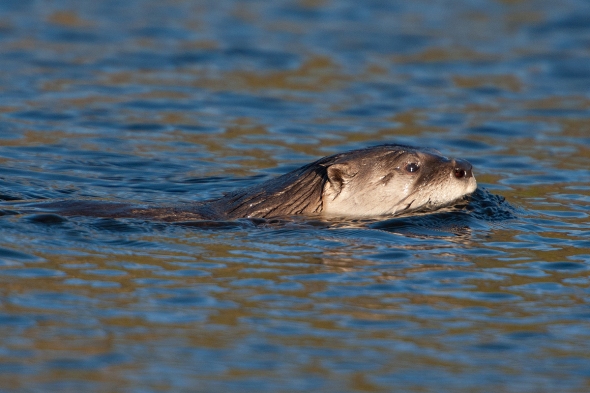 Is is amazing to watch him glide through the water. The motion is seemingly effortless and highly graceful.

Here he is sneaking up on some Coots. He is a clumsy stalker though and they always seem to get away in plenty of time. One of these days he’ll get it right.

Better settle for some fish instead. 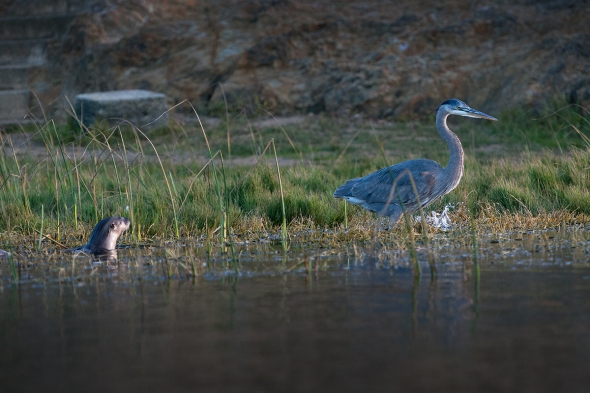 The Great Blue Heron seems to like following Sam around and shows little fear. I bet the fleeing fish make for easy pickings but the relationship could eventually turn sour. The otters in the Headlands have been seen stalking and attempting to catch herons too.

For now, all is peaceful. The heron continues untroubled and Sam continues to delight all those who pay a visit. If you do go down, enjoy the show but respect his space. It is a real priviledge to see a wild River Otter in such close proximity.

A word of warning… this is a post about predation and the pictures reflect that.

River Otters moved into Rodeo lagoon in the Marin Headlands about 4 years ago and the resident birds were ill prepared.

They became instant celebrities and many people went to the lagoon to try and catch a glimpse of the group. They started out seven strong but have since become a quartet.

Like lions on the Serengeti, they carefully stalk their prey. In this instance they were after mallards on the shore. Their main technique seems to be:
1. Locate prey floating in the lagoon
2. Submerge and close the distance underwater
3. Grab the prey from below and asphyxiate with a bite to the neck or drowning
Cute huh? 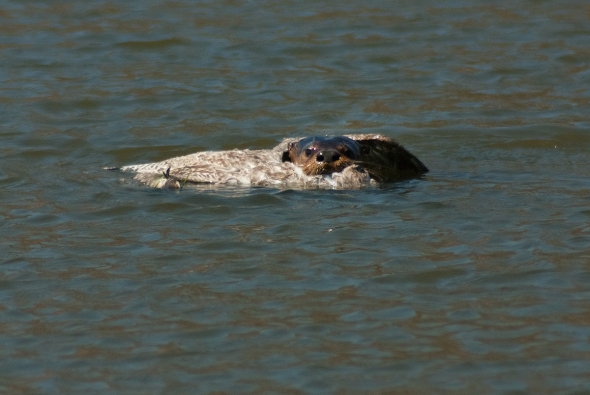 A juvenile gull snatched from mid-lagoon. 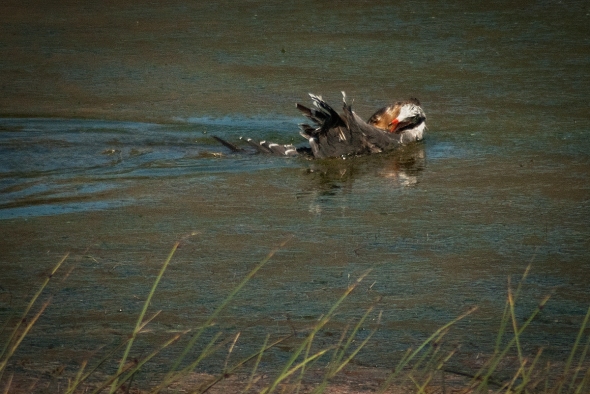 A Heermann’s Gull too slow to react gets caught and brought to a nearby dining spot.

After the hunter gets its fill the meal gets shared with the other otters waiting their turn. The number of feathers stuck in the vegetation nearby is evidence of many meals eaten here. The otter is working on the gull’s head (which, if you decide, you can see by clicking on the image). 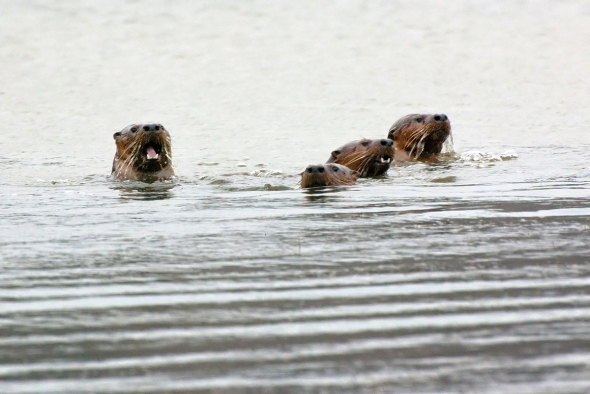 One of these otters is an experienced hunter who seems to take on large prey the others pass up.

On rainy morning the gang sees a Great Blue Heron resting on shore and they all submerge and disappear.

30 seconds later the water around the heron boils and an otter lunges at the heron who leaps to safety just in time. 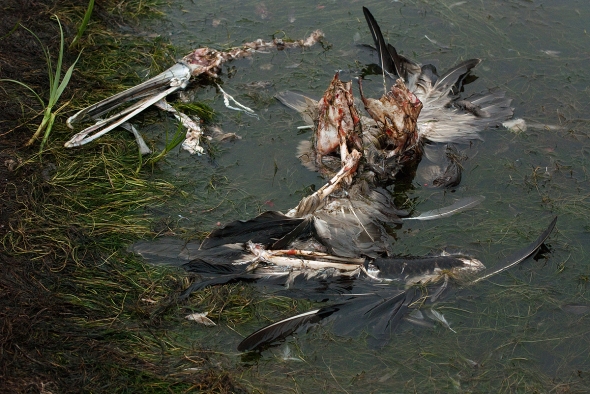 This Pelican wasn’t so lucky. It was one of many that the otters caught as they landed on the lagoon to rest during their meanderings down the coast. As the months went on, fewer and fewer Pelicans spent any time on the water and otters switched to other prey.